How the Religious Discrimination Bill will hurt Australians

At the hearings of the two parliamentary inquiries into the Religious Discrimination Bill over the summer months, a wide range of community groups warned that the legislation, in its current form, would negatively affect many sections of society and cause division.

The groups who make up the #DontDivideUs coalition are now sharing some of these testimonies on our social media platforms. If you see these image posts appear in your social media, please share them with your friends and family to help raise awareness of how the Bill will hurt many sections of our society.

Also, please use this crucial time to contact your federal member of the House of Representatives and your state or territory senators to let them know about your concerns about the Bill. 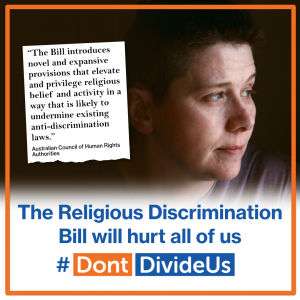 In submissions to parliamentary inquiries, many human rights bodies and legal experts have pointed out that the Bill would create new privileges for religious people and religious institutions at the expense of others.

The Australian Council of Human Rights Authorities (ACHRA), representing state and territory human rights and equal opportunity commissions, said the Bill failed to appropriately balance protecting religious belief and safeguarding other rights, “including the right to be free from discrimination.”

In its submission, Women’s Health Victoria said the Bill privileges religious views in workplaces, schools and service delivery settings over women’s rights to equality, healthcare and other needs.

“(The Bill) facilitates a potential increase in stigma and discrimination against women asserting their rights to gender equality and sexual, reproductive and mental health care.” 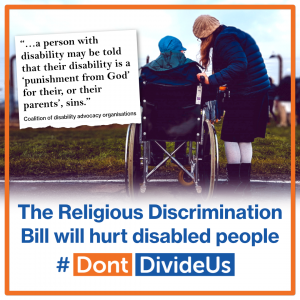 In a submission to a parliamentary inquiry, 26 community disability groups joined forces to express their “deep concern” and warn about the “harmful impacts” of the legislation.

“We are very concerned that the Religious Discrimination Bill’s provision permitting ‘statements of belief’ will override existing legal and policy protections for people with disability from humiliating, insulting, ridiculing and offensive behaviour and result in an increase in such behaviour towards people with disability,” they said. 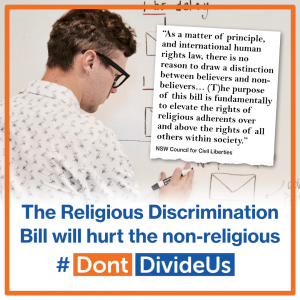 Many human rights and civil liberty groups, including the New South Wales Council for Civil Liberties, have pointed out that the bill privileges the rights of religious adherents above those of everyone else.

Employment opportunities for non-religious people will become limited, as taxpayer-funded religious-based employers in education, health and aged-care sectors are empowered to give preference to people of their own faith for all positions – from cleaners and gardeners to tuckshop managers and maths teachers! 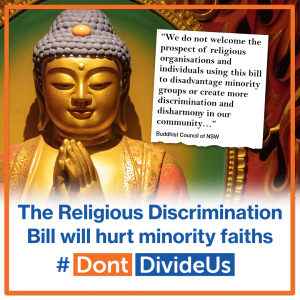 A number of minority faith groups are warning of social disharmony because of the Religious Discrimination Bill.

One of those is the Buddhist Council of New South Wales. In its submission to a parliamentary inquiry, it predicted other religious bodies and religious people would use the Bill to disadvantage religious minorities.

The ‘statements of belief’ clause would “give licence to harmful speech” against minority religions and other groups in society, such as LGBTIQ people, it said.

“There is also a future potential that by preferencing the employment of people of the same religion, or on the basis of a religious view, religious hospitals, aged care homes, disability services and other places may become unwelcoming or intolerant of different religions, or of other minority groups.” 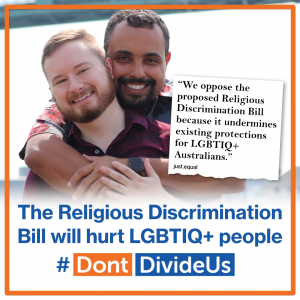 Just.Equal, in a submission to a parliament inquiry, is particularly concerned that the Bill will override state anti-discrimination laws, with the ‘statements of belief’ provision to “encourage denigrating and demeaning language”.

“The Religious Discrimination Bill takes Australia backwards by allowing denigrating and discriminatory behaviour which most Australians abhor and which is presently prevented in some states. This Bill is said to protect religious freedom but actually entrenches legal privilege for those with harmful prejudices,” said Just.Equal. 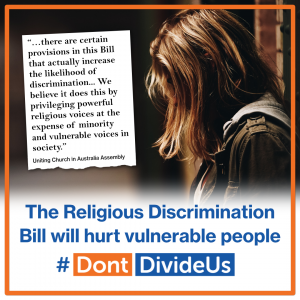 The Uniting Church in Australia Assembly, in its submission to a parliamentary inquiry, warned that provisions in the Bill would act as a barrier to vulnerable people accessing essential services or people from minority groups seeking employment.

Catholic charities, including the St Vincent de Paul Society and Sacred Heart Mission, said the anti-discrimination laws should instead be aimed at protecting the most vulnerable and marginalised.

“We believe [the Bill] will exclude people from accessing essential services, such as health care and social services; and cause harm and distress to people who are already vulnerable within our society,” said Sacred Heart Mission.