Now is time for unity, not religious division

The #DontDivideUs coalition is calling on the federal government to scrap, once and for all, its divisive Religious Discrimination Bill.

With the legislation having failed to progress in the Senate and looking unlikely to be debated again before the upcoming election, the #DontDivideUs coalition says that now is the time to drop the divisive Bill and seek to unite Australians instead of dividing us along religious lines.

After years of trauma due to the bushfires, the pandemic and a divisive debate over the Religious Discrimination Bill, Australians just want to reclaim a sense of unity.

To everyone who has supported the #DontDivideUs campaign so far, thank you. Your donations and support have helped us spread our message in recent critical weeks to thousands of Australians. 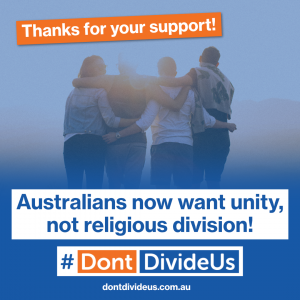 Please take a moment to contact the many MPs and Senators who valiantly took a stand in opposition to the Bill – especially those in the government who defied their own Prime Minister – and thank them for their efforts.

As relieved as we are today that the Religious Discrimination Bill seems to be dead in the water, we know our campaign against religious privilege may not be over.

There’s also a need for the Australian Law Reform Commission to be allowed to do its full review of religious exemptions to anti-discrimination laws. At the moment, that inquiry is conditional on the Religious Discrimination Bill becoming law.

The #DontDivideUs campaign will stand ready to push back on any attempts to resuscitate this divisive Bill.

Feel free to share this statement with your friends on social media.

Once again, thank you for your support.